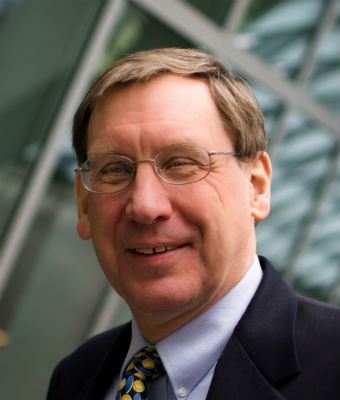 Jim has worked effectively at the interface between scientific discovery and business. He has extensive experience in academic technology transfer where he led programs in both public and private universities. He also has held boundary-spanning positions in companies dealing with the recognition, assessment, and commercialization of early-stage discoveries. He is an experienced, effective professional who understands the needs and perspectives of both academic institutions and corporate partners.

Jim is currently a member of the board of directors of Golden Pine Ventures, a venture fund that is focused on investments in early-stage biotechnology companies.

Jim received a BS in zoology, and a PhD in physiology from Iowa State University and he received postdoctoral training in neurobiology at the University of Southern California.

Jim is a Past President of the Association of University Technology Managers (AUTM), an international organization of academic technology transfer professionals. AUTM awarded Jim its highest honor, the Bayh-Dole award, “in recognition of untiring efforts to foster and promote intellectual property activities on behalf of the university and nonprofit community”. He also served as a member of the Board of Directors of the Council on Governmental Relations (COGR), a Washington-based association of over 170 research universities and research institutes that focus on the policies and issues of federally sponsored research programs at universities, and he chaired its Contracts and Intellectual Property Committee.